This filly was bred at the Gestuet Falkenhorst Stud in Germany and purchased by ourselves upon weaning as part of a sales agreement for one of our colts.  Due to downsizing dramatically we are regretfully offering this rather splendid filly for sale.

Very well handled and very mannerly for one so young, she is a gentle, cooperative and sociable young horse with lovely movement and very nice conformation.

She has full KWPN Registration papers and is sired by the Zfdp Approved stallion Alisdair GF (The Alchemist XX x Cavalet Trojsky/Royal David) and out of a Morgengold II/Philippo mare.

A little about her breeding

Alisadir GF is an AES Approved and performance tested eventing stallion of over 84% TB blood.  Aside from his excellent gaits and jumping ability, he is a stallion who also inherited the superb temperament and rideability of his sire RFF The Alchemist.

Alchemist was the first Licensed and HLP certified cremello thoroughbred stallion in Europe.  His maternal line is considered one of the best in Czech with bloodlines that have produced numerous performance horses. She herself has produced three Licensed sons; Blue Eyed Dream GF was sold to the US and competed to GP dressage, Glitter N' Cream also Graded by two federations and described as arguably the best cremello Warmblood ever seen!

Morgegold II got a 10 during his 100 day Peformance Test for his attitude and character and 8's for both his movement and and jumping.His sire Malteser Gold is a son of the famous Trakehner dressage sire Marduc who produced five Graded sons with a dam who also produced two additional Graded sons herself, Morgengold I and Mangold N.

Their damsire Magister was one of the most important Trakehner stallions of the 1970s, known for his incredible character and as a sire of horses excelling in both the disciplines of dressage and showjumping.

Morgengld II is a stallion whose first crop of foals ALL awarded 1A Premiums for their correct conformation and exceptional paces. 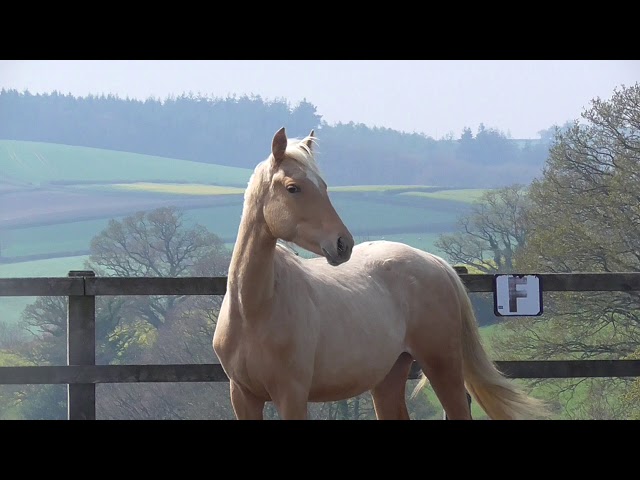